Fun day of the past, present and future of Tampa – Tampa 101 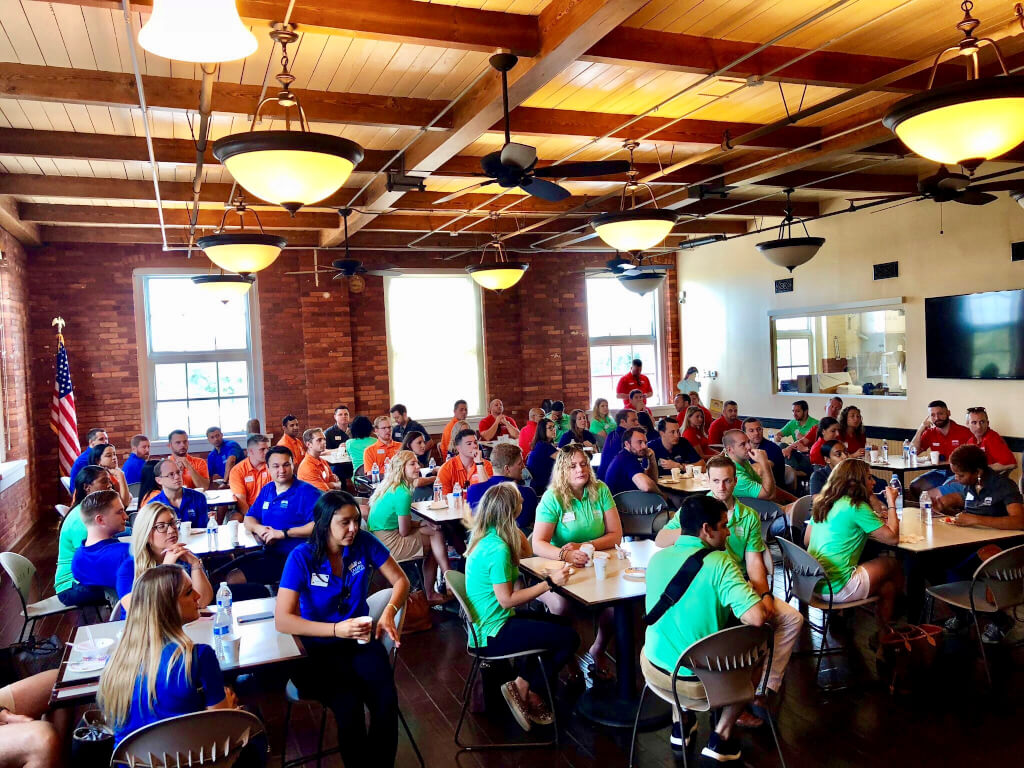 On October 9, 2018, our Tampa Connection Class of 2018-19 participated in the Tampa 101 program.  Our mission for this program is to inspire and educate the next leaders of Tampa Bay to learn about Tampa’s past, present and future with engaging programming and local Tampa site visits.

Continuing with tradition, we began the program at the JC Newman Cigar Co. in Ybor City where we had an authentic Cuban breakfast from Brocato’s, which is celebrating its 70th anniversary this year.  Shira Martin, CFO and Bobby Newman, a 3rd generation owner of JC Newman, spoke to us about the factory’s history, the art of cigar making, building relationships, and their philanthropic support of Southeastern Guide Dogs and Cigar Family Charitable Foundation, a nonprofit supporting families of the Dominican Republic cigar makers that work for JC Newman.  Then, the TC group toured the factory to see firsthand how cigars are made, from the raw materials all the way to the finished and packaged product.

Next on the agenda was Tampa Connection’s first stopover at Visit Tampa Bay where we heard from JoLynn Lokey, COO and Patrick Harrison, Chief Marketing Officer on the #1 industry in Florida, Tourism. CMO Patrick Harrison took a deeper dive into the region’s strategy on attracting more tourists to not only visit Tampa, but to come back to stay. This plus how their organization partners with businesses and hotels to drive impact to our local economy.

Then we were off to the Tampa Bay History Center.  The class enjoyed a wonderful lunch from the Columbia Restaurant, and the iconic, fourth-generation restaurateur Richard Gonzmart of the Columbia Restaurant Group inspired us with his passion for Tampa’s past and his vision for Tampa’s future. Resonating themes throughout his talk included the importance of acts of kindness, taking risks in business and believing that you can overcome any obstacles life throws at you.  Additional topics of Richard’s discussion ranged from transportation, to nonprofits, and even an anecdotal story on the statue of Ulele along Tampa’s Riverwalk. An interesting employment fact Richard shared was that of his 15 restaurants and 1550 employees, approximately 23% of employees have tenure of 10+ years.  Post lunch, the class then enjoyed self-guided tours of the Tampa Bay History Center’s museum.

The next stop was USF’s Center for Advanced Medical Learning and Simulation, a.k.a. USF CAMLS. Paul Ayres, Director of Sales, Marketing & Business Development kicked off our visit with an overview of CAMLS and the local impact on Tampa.  Then the class broke into groups for tours of the facility, which is one of the largest healthcare simulation locations in the U.S.

Our last stop was the Florida Aquarium where the class had an opportunity to listen to a distinguished panel on the “Future of Tampa.”  Roger Germann, CEO of the Florida Aquarium, Lakshmi Shenoy CEO of Embarc Collective, and Brian Moll SVP of Strategic Property Partners discussed the current state of Tampa and what needs to be done to take the region to the next level. The class then moved to the rooftop of the Florida Aquarium for a happy hour to reflect on the day, network, and celebrate a successful Tampa 101 program!  Some members of the class also enjoyed private, behind-the-scenes tours of FLAQ’s most exciting exhibits.

Our Focus on Leadership Development

We organized seating and tour groups so that class members would engage with members from other teams and expand their networks of personal and professional relationships.  Through stories shared by speakers, we illustrated how people in the area have taken ownership and pride in making Tampa a wonderful place to live.  We imparted on the class that change is good and necessary, and each of us can step up in our own way to contribute, and if we do, others will follow. #LeadershipwithImpact

Our Focus on Nonprofit

Some of the locations we visited were non-profit organizations.  It was inspiring to experience how successful the organizations can be when they are supported by the community, businesses, leaders, volunteers and employees who are passionate about their mission.  Our ultimate goal is to expose class members to a variety of organizations in the area that can use our help, and that help can come in many forms, such as: patronage, donations, word-of-mouth advertising, volunteering, and more.