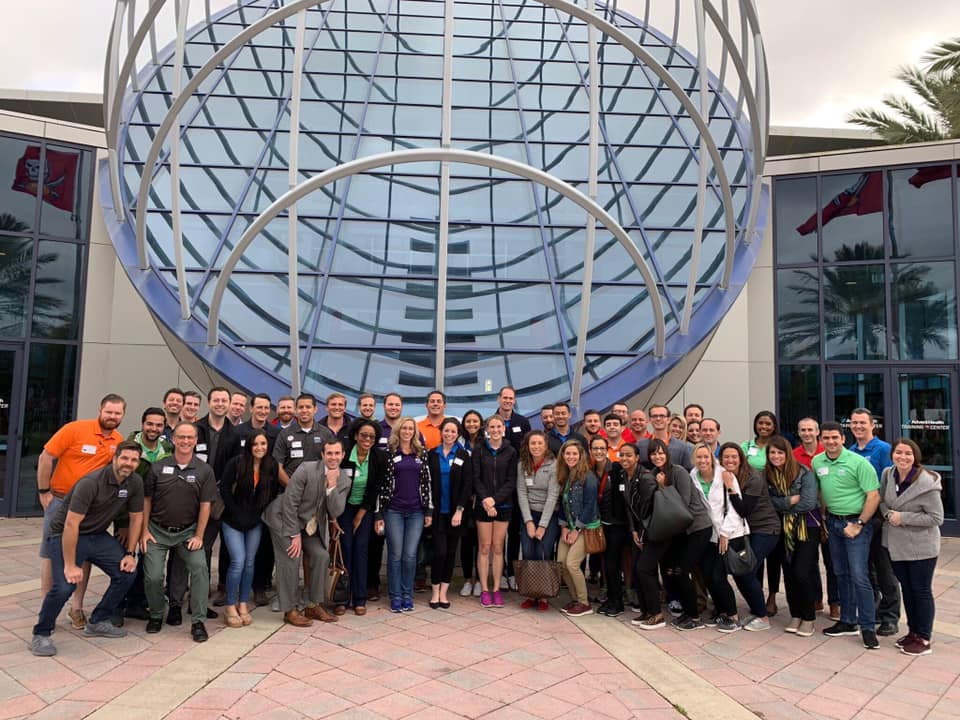 On Tuesday, March 5, 2019 the Tampa Connection Class of 2018-2019 attended and participated in Tampa Connection’s annual Sports Day Program.  The planning committee’s mission for the day was demonstrate the importance and relevance of the social, economic, and philanthropic impacts that Tampa Bay Sports teams have on the community. This was accomplished by visiting some of Tampa’s prominent professional sports team and venues, as well as learning from several distinguished speakers and panels. After enjoying some coffee and tea while we watched the Lightning’s morning skate session, we heard from our first panel of speakers, comprised of Eric Blankenship, Vice President of Marketing for the Tampa Bay Lighting; Ryan Cook, Senior Director of Sales and Service for the Tampa Bay Lighting; and Deno Anagnost, Vice President of Sales for the Tampa Bay Buccaneers.  Jason Aughey, Senior Director of the Tampa Bay Sports Commission, moderated the panel. Eric, Ryan, and Deno shared some insights as to the marketing, revenue-generating, and other business-related aspects of our local professional sports team, as well as their personal journeys and day-to-day lives in the sports business field. After departing Amalie Arena, we were lucky enough to be treated to lunch by the Tampa Bay Buccaneers in the Buccaneers team cafeteria. We were served a hot buffet lunch full of delicious food (in very generous portions) served in plates large enough to satisfy a hungry football player after practice! After lunch, we were able to tour the Buccaneer’s Advent Health Training Center (formerly One Buc Place), including the new indoor training field and facility. We were one of the first groups to be allowed to tour this new world-class indoor training facility which allows the Buccaneers to escape the unpredictable fall Florida weather while training for the upcoming seasons. Those who stayed for happy hour at the stunning Arturo Fuente Cigar Factory building in Ybor City were treated to a sports-themed celebration including cigars, tailgate-themed food, drink, and games, as well as a Tampa Bay Sports trivia session. Those that were able to prove their knowledge of our local teams were rewarded with a Tampa Bay Lightning grilling set!